First of all, hello, hello…I’ve taken a long hiatus from this blog, but I have lots to share and have vowed to resume writing regularly. We’ll see how I do!!

There has been a lot of chatter lately about the Perseid Meteor Shower, that annual display of spectacular in the skies at night in mid-late August, a reminder of just how vast the Universe really is and how little we truly know about it. For me, it is also a reminder of the dazzling summers I spent working and playing in the Rocky Mountains in my twenties – August was the month to sleep outside every single night if possible to catch the Perseid show.

For two of those Augusts, I slept tentless with friends on the shores of Lake McDonald in Glacier National Park in Montana for as many nights as possible. We braved the thought of grizzlies in the beginning of their “feeding frenzy”, the season where they start to fatten up for winter, and sometimes woke in the morning to a good layer of frost on my sleeping bag. In the depths of those nights, the sky would be full of colors, exploding in reds and yellows and greens, reflecting over the still lake, forever engraved in my mind and heart as one of my extraordinary experiences.

Another of those summers I spent camping with new friends (again, tentless) on the mesas and shorelines of Lake Powell in Utah. While not able to do so every evening, I was fortunate enough to have long weekends off from my job as a houseboat instructor at Wahweap Marina. We again would stay up, staring at the sky, waiting for the show. There is one evening of that Perseid I will never forget – the meteors were bigger than I’d ever seen.  I caught a glimpse of several as they blasted the desert sky with green and orange in the reflection of the glasses worn by the man sitting next to me. The man I would marry six years later.

So Perseid and I are old friends. Along with all of this beauty and nostalgia, however, Perseid brings a clear signal that summer’s end is fast approaching. From this point forward, through the next 2-3 weeks, the same song gets stuck in my head – it just pops up, unannounced, like a meteor itself, and it stays there, running in the background.

Obviously, all of those evenings spent camping on lake shores means that naturally a night swim was practically a requirement. The song addresses not just the fleeting of summer, but also of the carefree abandon of youth. I was aware of it as it was happening then, and I am reminded of it now, in my early forties, every August when Perseid comes for a visit. I live in a much more urban, and therefore well-lit area now, and I haven’t seen Perseid in the past four or five years. Regardless, I know the meteors are showing their splendid selves, and the song is running through my head. “September’s coming soon…”

Yes, it is.  Time for a little Nightswimming. 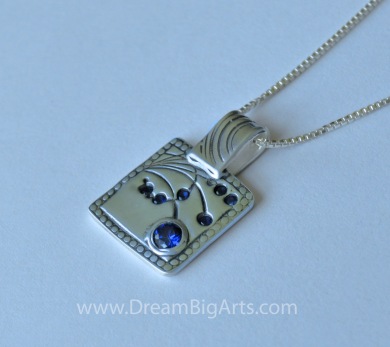 The above thoughts inspired this new piece, a pendant with sapphires shooting across the surface, much like meteors. Sapphire is the birthstone of September, which is ever so close on our heels.

← all about the kids…
Colorful Provence →

One thought on “Meteor Showers and R.E.M… it’s personal”

what do you think? Cancel reply